8:20 pm: In an alternate world, I would be watching the close race in the AL East, as the Yankees and Red Sox battle it out at Fenway.  As it is, the Yankees are creamng the lst place Red Sox. 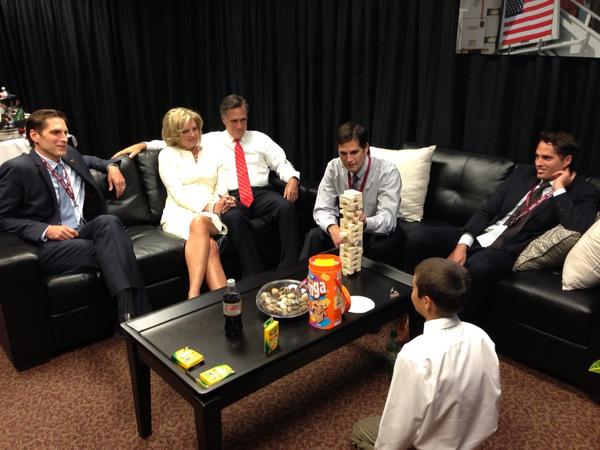 8:50 pm – I just got an email from Obama saying he won't go onstage unless I donate some money.  *Sigh*

Here’s how Jim Lehrer, the moderator, has decided to structure the 90-minute event.

Each of the segments will run for 15 minutes, and Mr. Lehrer will have the ability to adjust the subject matter of any segment “because of news developments,” according to the Web site of the Commission on Presidential Debates.

9:03 pm – And they're off!  Obama starts by pandering to the First Lady. Romney: "I disagree with your decision to marry Michelle. On Day One, I'll reverse it."

9:06 pm – Romney hits specifics with 5 points.  Uses "trickle down government".  Not as catchy as he thinks.

9:12 pm – Romney calls it the "economy tax".  Does he have a new vocab word for everything?

9:28 pm – Romney would cut PBS. Does he have any idea how little that would save?

9:34 pm – Romney is actually doing well, but Obama is coming back nicely with taxing oil corporations.

9:46 pm – Obama has a hard time forming a sentence, but what he's saying about vouchers is right.

9:47 pm – Conservative Ben Smith at Buzzfeed has already written his "who won" article

10:03 pm – Romney is lying about Obamacare big time.  What is this board?  There is no board that makes decisions about individual health care. Obama hits Romney: "We used the same advisors, and they say it was the same plan."

10:16 pm – I like this part about the role of government.  Obama's answer was good; Romney is wrapping himself in the Constitution and God.

ZINGER! Romney: "As president, you're entitled to your own airplane and your own house, but not your own facts."

10:26 pm – I like what Obama says about trying to work with Republicans; I just wish he could say it better.

10:28 pm – Closing arguments.  Obama should look at the camera for this part; he's not.  Romney is doing it.

Final thoughts:  Odd that the 47% was never brought up. Domestic issues debate skipped environment, LGBT rights, abortion, equal pay, and basically everything other than tax and budget

Substance: Obama.  Style: Romney, big time.  He lies, but at least he's enthused.  And he was in command.  Obama looked pissed that he was there.